The work of the Mutographs team relies on being able to access  high quality scientific data about cancer mutations. Here, Mutographs scientist Ellie Dunstone explains how the COSMIC team and their catalogue of cancer data support the Mutographs project.

When most people hear the term “genetic disease,” they think of inherited conditions that a person is born with. However, cancer is also driven by changes to genes called mutations that happen throughout a person’s life. Our increasing understanding of this process is changing cancer treatment.

Scientists have thought that cancer is linked to changes in the DNA since the late 19th century, when the German pathologist David von Hansemann noticed that the abnormal division of cancer cells under the microscope led to errors in the number of chromosomes. But it was only in 1982 that the first naturally-occurring mutation linked to human cancer was discovered. This mutation, changing a single DNA letter in the HRAS gene, paved the way for the identification of many more mutations that transform normal genes into drivers of tumour development. As more genes and mutations linked to cancer were discovered, scientists needed a way to collect and share this information. They needed to build a catalogue of genetic changes in cancer. 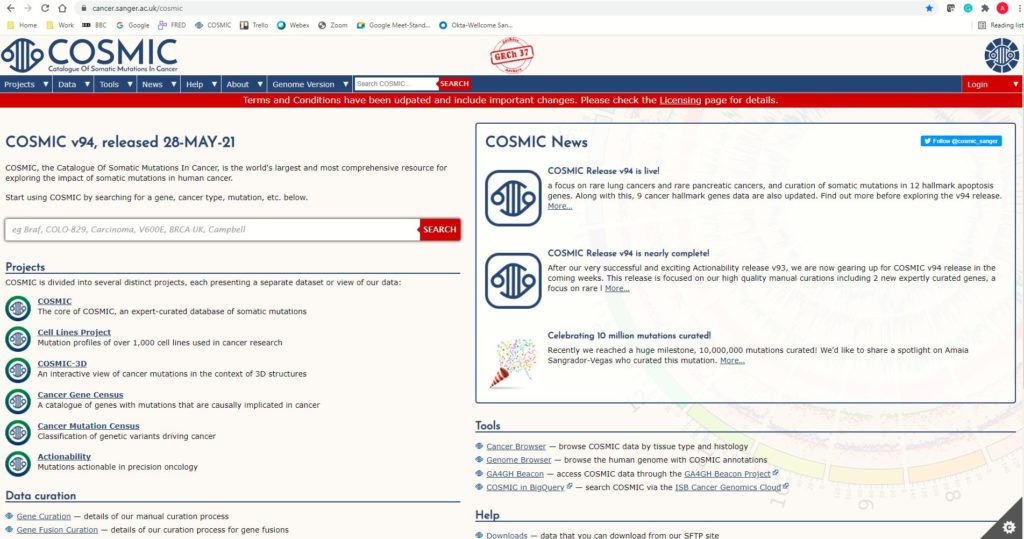 The homepage for COSMIC

COSMIC, the Catalogue Of Somatic Mutations In Cancer, is a comprehensive resource used by scientists to record and investigate the genetic mutations found in cancer. Launched in 2004, the database originally covered only four genes, HRAS, KRAS, NRAS and BRAF. These genes are all in the same molecular “pathway”, which regulates when a cell divides. A mutation in one of these genes can lead to errors in this process, leaving a cell dividing uncontrollably and causing the growth of a tumour.

Recent leaps forward in large-scale genetic sequencing of tumours has led to the discovery of hundreds of genes linked to cancer. COSMIC has had to grow in size to match the huge amount of data being generated – it has now catalogued over 70 million mutations from dozens of different cancer types.

Currently, the COSMIC team is part of the Wellcome Sanger Institute, based at the  Wellcome Genome Campus, curating a range of different types of information about mutations in cancer. These include the Cancer Gene Census, an expertly curated list of the most important genes involved in driving cancer, and COSMIC-3D, a platform for understanding how mutations affect the 3D structure of the proteins produced by genes linked to cancer. These resources are used by scientists worldwide for projects relating to cancer biology and drug discovery, with over 5,000 page views every day. 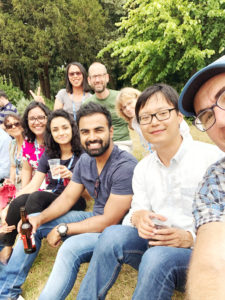 Members of the COSMIC team at the Wellcome Genome Campus

How does COSMIC support the Mutographs project?

As well as recording the specific mutations seen in tumours, COSMIC also curates a list of patterns of mutation called “mutational signatures”. DNA mutations can be caused by a range of different things, from errors in cell division to damage from external forces like ultraviolet light from the sun. Looking for these signatures in patients’ tumours can help scientists to identify the causes of cancer. One example of this is the story of aristolochic acid, a chemical found in a number of traditional medicines. This substance was already known to be linked to kidney problems, but the discovery of its specific mutational signature in patients with liver cancer in Asia led scientists to link the use of some kinds of herbal remedies to this disease. Discoveries like this can aid public health initiatives to help people limit their exposure to dangerous substances, reducing their cancer risk. The Mutographs project uses COSMIC’s list of mutational signatures to help identify the possible causes of patients’ cancers, and how this varies in different parts of the world.

From mutations to medicines

Keeping track of the mutations that cause cancer helps the development of targeted cancer treatments. For example, the discovery that melanoma skin cancer is often driven by a mutation in the BRAF gene led to the development of drugs that can specifically target this mutation, dramatically improving outcomes for some cancer patients. The benefit of COSMIC’s catalogue of mutations in cancer is that it can also be used to work out which other cancer types an existing treatment might work for. The same BRAF mutation has been found in some colon cancer patients, so scientists are now researching how the targeted drugs used in melanoma might also be added to colon cancer treatment regimens to make them more effective. 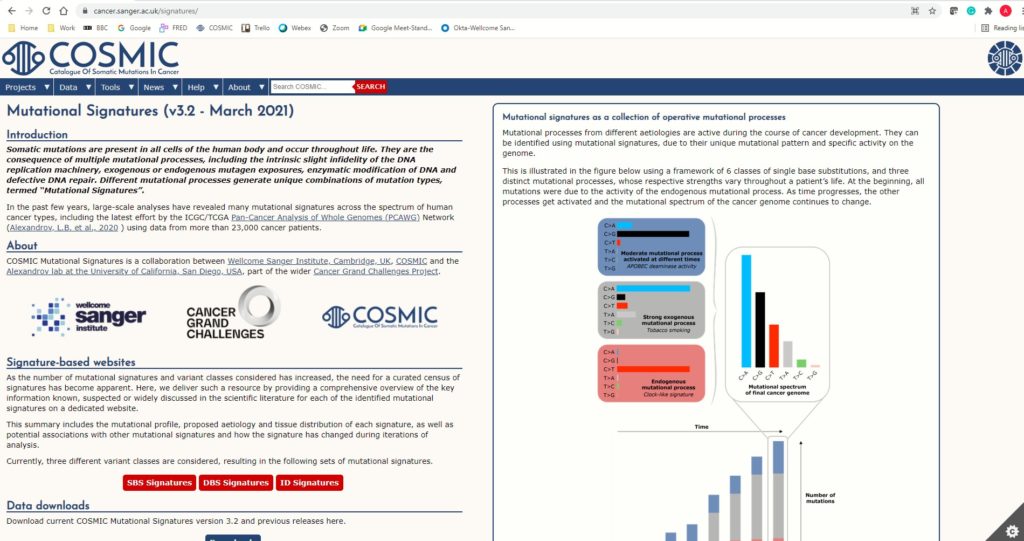 The homepage for mutational signatures on COSMIC

One of the newest COSMIC projects is Actionability, which aims to track the availability of drugs that target specific mutations in cancer and monitor clinical trials investigating these new treatments. At the moment, full information has been collected for 39 genes, with a further 161 having some human clinical study data. This resource will support research into targeted cancer treatments, with the ultimate aim of using our increasing knowledge of genetic changes in cancer to improve patient treatment using therapies personalised to the unique set of mutations in their tumour.

As more and more data is generated, COSMIC continues to grow and gather important information. This information will be of huge value to the Mutographs team, who will continue to use COSMIC resources in their search for finding preventable causes of cancer. Very soon, COSMIC will be launching more exciting products that will help provide further answers to some of the key questions in global cancer research.