One of the roles for the patient advocates on Mutographs is to visit countries where samples are being collected and find out more about the society and culture in that region and how people feel about cancer. We have so far visited Kenya and the Czech Republic and found out many fascinating and useful insights about cancer in those countries. Unsurprisingly, our plans for 2020 were severely affected by the Covid-19 pandemic.

We are never ones to shy away from an opportunity though, and we realised that needing to stay at home has its advantages, even when doing trips abroad. Using virtual platforms, we were able to chat to people and ‘visit’ places that previously hadn’t been very accessible for us. The opportunity arose to have conversations with study coordinators for the Mutographs project in Iran, so of course we jumped at the chance.

We were able to have four virtual ‘visits’ to the Iranian team in total – one to the team in Tehran, one to the study coordinator based in the Golestan province, one to the biobank collecting samples in Golestan and one to the home of a cancer patient.

Over the next two blogposts, we’ll be bringing you our highlights from these trips. 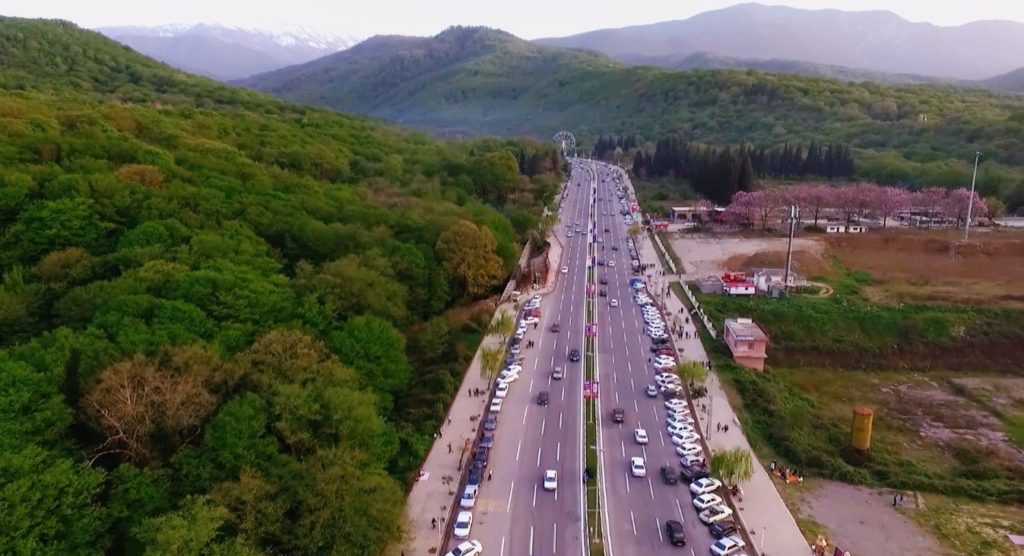 Iran has long been a source of curiosity to cancer researchers and doctors, in particular because of the rates of oesophageal squamous cell carcinoma (OSCC). The rate of this cancer is relatively low in the Iranian capital city, Tehran. But if you travel to the Golestan province in the north east of the country, you’ll find much higher rates. The reasons behind this aren’t fully known and this is one of the questions that the Mutographs team hopes to investigate. Previous evidence from epidemiological studies has indicated that drinking very hot tea, a custom in Iran, could be linked to OSCC. The Mutographs team are looking for genetic signals from mutational signatures that might help to shed some more light on this potential cause.

Iran is home to about 83 million people. The country is ethnically diverse and its inhabitants have many different backgrounds, communities and cultures. The Golestan province is in north east Iran and has a population of around 1.8 million. The capital city in this province is called Gorgan, which is located about 40 km from the coast of the Caspian Sea. It also has gorgeous mountainous views that our host Gholamreza Roshandel showed us from his office. The province is near the border with Turkmenistan and a large number of people in this province are of Turkmen ancestry, especially in the city of Gonbad, where the highest rates of OSCC are reported. Some communities in the province retain a unique identity expressed through their language and culture. 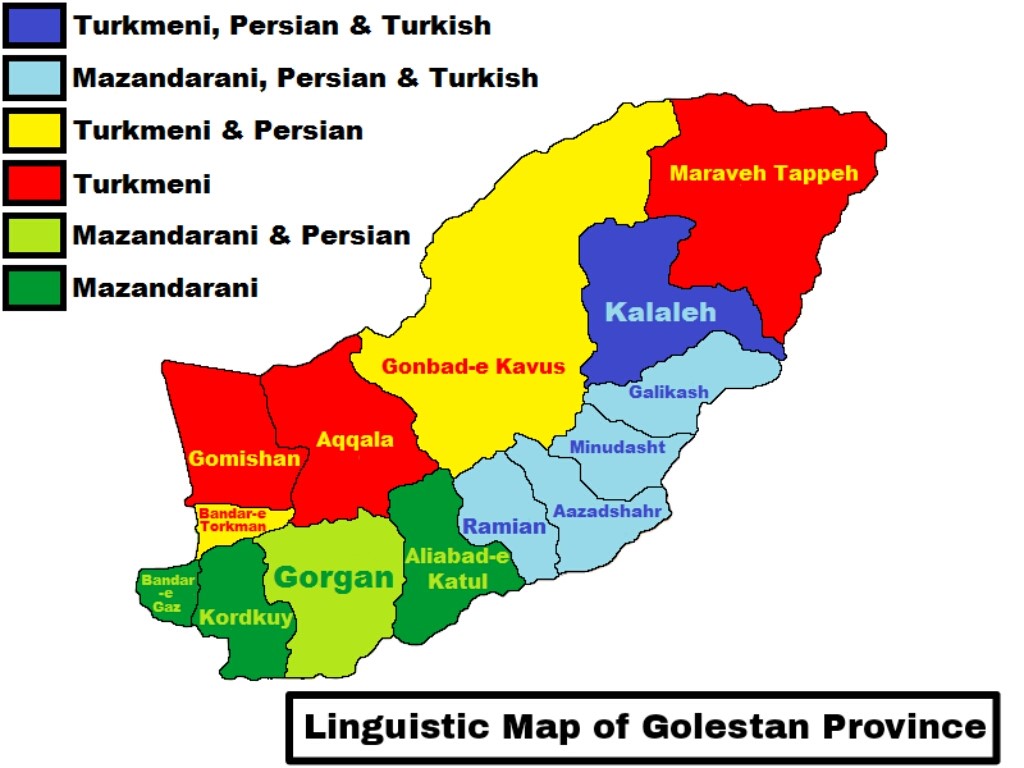 A map of the languages of the Golestan province (photo: Kelardashtian, Wikipedia)

One of the most fascinating parts of our visit was finding out about the research that has already been undertaken to understand why OSCC is so high in this region. The Mutographs study coordinator in Golestan, Gholamreza Roshandel (known as Reza), took us through the history.

A leading gastroenterologist, Reza Malekzadeh, set up two studies focused on gastroesophageal cancer in Northern Iran. One was a ‘case-control’ study, where people with and without cancer are directly compared. The other was a ‘cohort’ study, which follows a large number of people who don’t have cancer over a long period of time to see if there are any factors seen in people that go on to develop symptoms of cancer. These collaborative studies were set up between teams in Iran, IARC, and the National Cancer Institute (NCI) in the US. Starting in 2003, Dr Malekzadeh and his team have created a community of people from the region who are willing to donate biological samples such as tissue and blood and fill in questionnaires about their lifestyle. Some of the people are cancer patients but others don’t have signs of the disease. The participants benefit from diagnostic facilities provided free of charge by trained local doctors and gastroenterologists from Tehran.

These studies have focused solely on the Golestan province, particularly around the city of Gonbad and surrounding rural areas as they have the highest rates of OSCC. The two study designs together have recruited over 51,000 participants. The evidence from the studies pointed to drinking very hot tea and consuming opium as potential reasons behind developing OSCC.

In addition to the above-mentioned studies, a recent cancer research project has been started in 2016 by the Golestan Cancer Biobank (GoCB) at the Golestan University of Medical Sciences. The main aim of the GoCB is to collect and preserve biological samples and risk factor data from cancer patients throughout the Golestan province, and to provide these samples and data to local, national or international research projects.

The study team have been providing samples and questionnaire information to the Mutographs study so we can explore the genetic evidence. 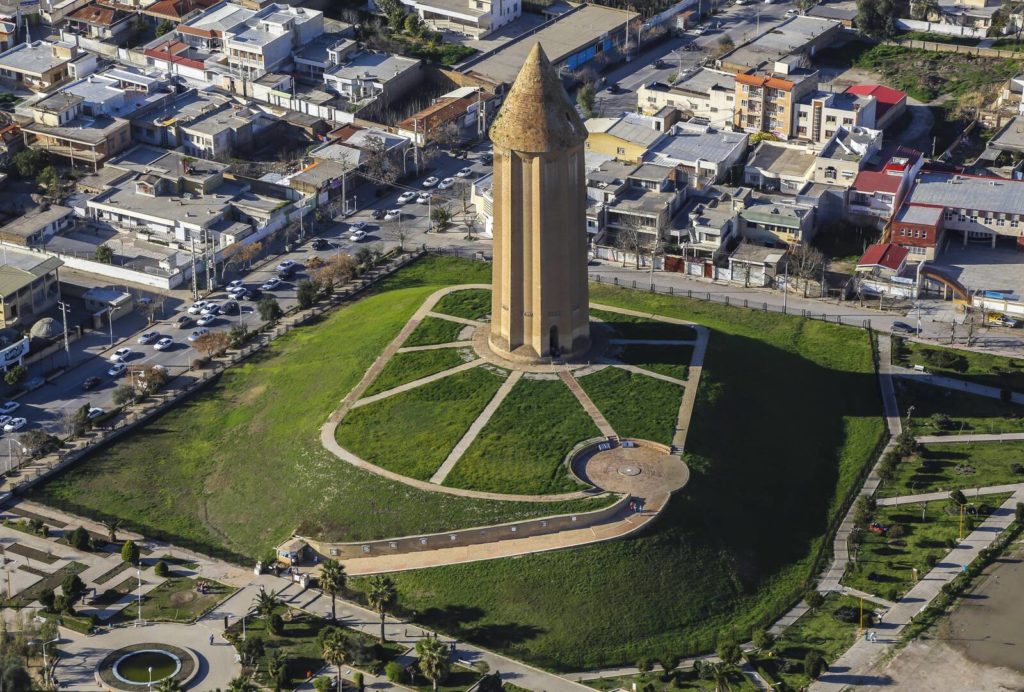 The Gonbad-e-Qaboos Tower in Gonbad city

The benefits of engaging the community

The two studies that were originally set up in the Golestan province have been hugely successful. Many of the 50,000 people recruited to the larger study (the Golestan Cohort Study) are still actively followed up by the team and happy to take part today, which is a great outcome.

Reza Roshandel explained to us how the team have managed to engage with the community so well. The region is home to many different cultures with their own customs and some speak a different language. The study leaders were careful from the very beginning to engage with these communities on their own terms, with the help of trusted local leaders who spoke the same language. By doing this, they gained the acceptance of the community, who were also eager to help as they knew many people who had been affected by cancer.

A particularly effective method was to use the local health workers, known as Behvarz. These are local members of the community who have been trained to help with healthcare needs. They work from local ‘health houses’ based in the villages. They deal with basic medical issues and will refer patients to a specialist where needed. In addition to local doctors, the Behvarz were able to identify and refer anyone who would like to take part in the studies.

There were also benefits for the participants. Anyone enrolled in the study who developed symptoms of gastro-oesophageal cancer was referred to the specialist Atrak clinic. Here, they received diagnostic procedures such as an endoscopy for free. Iranians usually pay for healthcare through a health insurance scheme. The public insurance, provided by the government, covers about 70% of the costs, so being able to have the diagnostic procedures for free is a huge bonus.

Another reason that the studies were so successful is that they created jobs and opportunities for these rural regions. The local doctors were sent to Tehran to train in techniques for detecting upper GI disorders, with the directive that they had to return to their local community to practice. Local people, often women of Turkmen ancestry, were trained to help with the study at the health houses. 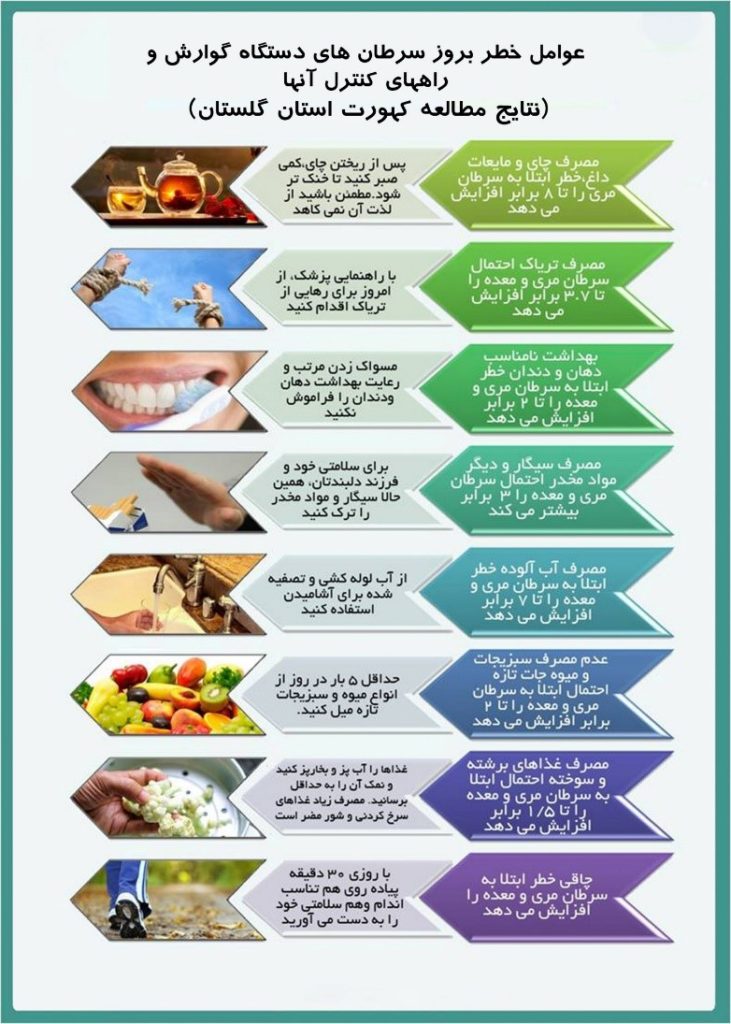 A pamphlet explaining how a healthy lifestyle can reduce cancer risk

Making use of these community connections was also important when it came to feeding back the results of the study. The study team provided pamphlets and information to be kept in the health houses to inform people how they can reduce their risk of cancer. Some people, particularly in rural regions, are illiterate, so the study team also produced media and videos and relied on family members who could read to help spread the word.

It was really good to hear how passionate Reza and his team were about helping these communities that have been so badly affected by OSCC. The team in Iran have really shown the benefits of engaging patients early on in the research process and this is something we hope that research teams doing this type of field work will consider when designing studies like these.